During the winter of 2019, the variable red supergiant star Betelgeuse faded to a deep minimum of luminosity, almost down to +1 in photovisual magnitude around the new year. At this point, the star was slightly dimmer than Aldebaran. As an exercise but also of course by curiosity, I decided to try to perform regular spectroscopy of Betelgeuse, just to see if I was able to record the variations. The brightness of the star began to recover already in January and unfortunately, due to poor meteorological  conditions, I missed the period of minimum. However I have been able to gather three observations on February 14th, February 26th, and March 22nd. The goal was double:

2) Trying to calculate BVRI magnitudes, using the AAVSO data as reference. Here is a screenshot of the light curve of Betelgeuse obtained from the AAVSO, showing the evolution of the star's magnitudes in both the V and B bands: 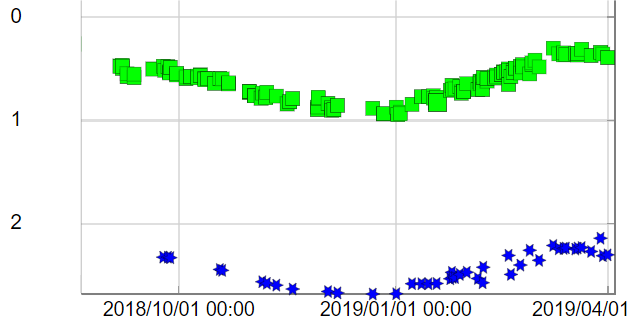 To skip some stages of the whole processing, here are the spectra of the two stars with synthetic colors, expressed in absolute flux, taken on February 26th, 2019. I have added defocused real images taken with the color camera ASI224MC (and an IR-cut filter). The color was balanced to match my visual appreciation, with a yellow mustard glow for Phi2 while Betelgeuse was glaring in a more rusty orange tint.

I must precise that the spectral type that I have use to correct Phi2's spectrum, and then Betelgeuse's one, is not exactly that of the star. The spectral type is supposed to be G9,5III (SIMBAD) but no reference of that precise type exists in the softwares'libraries. I took for reference the closest type that is K0III.

To continue, the two images below show: at left, the sensitivity curve calculated with Phi2 Orionis as the reference (for Feb.26th, but of course two other curves exist for the other two dates), and at right, the three spectra of Betelgeuse in digital counts for 1 second. Despite the possible differences of atmospheric transparency between each night, an evolution looks to be detected. The correction in absolute flux will tell us whether it is real or not.

And below is the comparison graph for the three spectra of Betelgeuse in absolute flux. The evolution looks real: there is a noticeable increase in flux from 14th to 26th February, but only a mild increase during the following month. On the next step we will verify this by calculating the BVRI magnitudes but it does looks coherent with the AAVSO curve, which shows that the brightening of the star stalled during March of 2019. 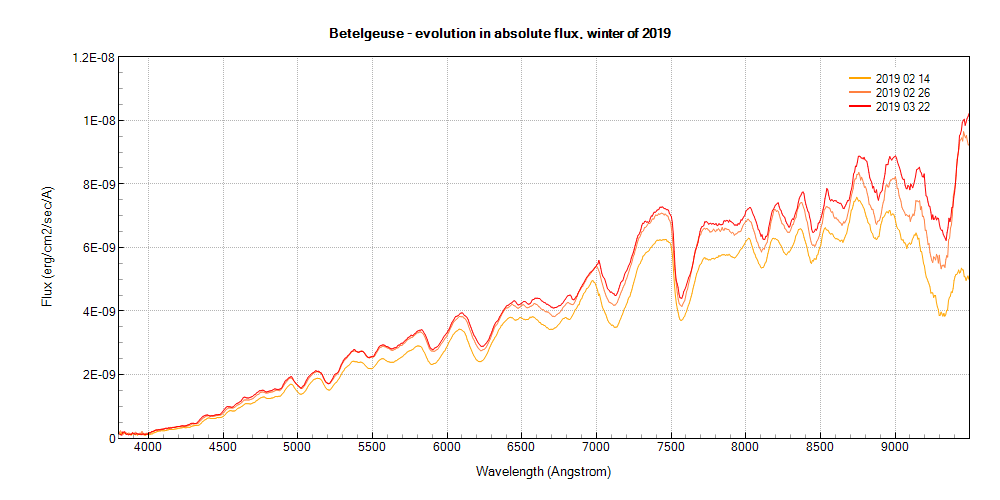 Using the method described in this page, I have calculated the magnitudes of Betelgeuse in the four Johnson bands BVRIc. At left are my results superimposed to the AAVSO data. My findings for the V and B bands look completely coherent with those of other observers (a bit fainter for B, maybe because my spectra are a bit too noisy in that band on a strongly red star). Unfortunately, no results are proposed for R and I. The SIMBAD values for Betelgeuse are somewhat different (when V =0,42, R = -1,17 and I=-2,45) but another reference proposes again different values so this looks like a problem. However, my experience with R Leonis might show that my calculations, although very different from the SIMBAD values for red stars, are coherent with other CCD observers. At right is an example of how the different spectral bands look when multiplied by the synthetic filters. This graphic is executed on the absolute flux spectrum on February 26th, 2019, but the magnitudes have been calculated with the ADU spectra, not the flux ones.

And finally this tab summarizes the results :