LINEARITY TEST OF THE ASI290MM

When doing photometry, it is important to test the linearity of the response of your camera. As an example, if you take an image of a stable light source of 1 second, and another one in 2 seconds, the amount of light gathered in 2 seconds should be just twice the amount gathered in 1 second. If a camera does not behave like this, it will of course ruin the results!

Christian Buil recently performed a linear test of the response of some CMOS cameras, among which was the ASI290MM. The result was fine, and so I could have just trusted his results and use my camera. However, for some technical reasons (sampling and weight of the final images), I have choosed to use the camera in 2x2 binning. I also choose a particular level of gain, which should not change whatever is the target. To be sure I could trust my setting, I decided to perform a test myself.

Usually it's better to use a stable light source in laboratory. However I have no such source and so I have decided to use the light from a star, as often. On March 6th 2021 at the end of an observing session I took several exposures of the last star observed which was Sigma Hydrae. The seeing was not very good and twinkling could affect the results, so I put on a very deep IR-pass filter, a sloan z' (820 nm+).

1000 images were taken for each exposure, and the best 500 were averaged for each one (not added). The results are: 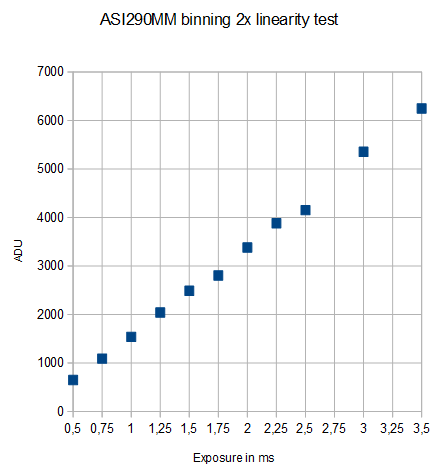 The results look fine, taking into account that by nature the light source was not completely undisturbed. The last two exposures correspond to a mean saturation of around 70%, and by 4 ms of exposure, the histogram was reaching from time to time a saturation of 100%. I had decided to target a mean saturation of 25% for the stars, so this looks like a safe level (due to turbulence, from one exposure to the other there can be a great variation so I would not shoot if the saturation looks often around 50 % - this could be done for planets though).

Christian Buil is also explaining that there is a sudden jump in response when passing from 0,99 to 1 second, for all ZWO cameras. For my targets (planets, bright stars) I don't expect this value of exposure to be met, by far.