Photometry is the measurement of the light intensity of an astronomical object, expressed in a standard system of reference so that any observation made by different observers having different equipment can be directly compared. Although it is not the only existing system, the Johnson-Cousin UBVRI is the most used among amateurs. I'm interested in performing photometry for Uranus and Neptune because this is another way of comparing data through the years.

To be compared with anyone else's observation, the photometric data of an observer must be linked to the standard system and this is done by calculating coefficients of transformation. This can be a complicated task and as of April, 2019, I have decided to work only with differential photometry between the target and one or more reference stars found at the same elevation. This allows to avoid taking into account the parameter of the changing airmass through the time, at least at a modest level of precision.

To calculate my coefficients, I have used the method proposed by the Association of variable star observers, in their CCD manual. This method is built for observations of stars found on the same camera field, which on the sky is very small so they assume that the airmass differences are negligible. My situation is different because I am not using objects found on the same field. Moreover, the proposed method of calculation, which consist of observing various open clusters of stars, can not be used directly for me because :

1) I will derive the photometry from Star analyzer spectra, not glass filters images, and so such a field would result in a mess of spectra superimposed with stars, rendering the data certainly unusable
2) The true field of my current 300 mm telescope even at prime focus is anyway too small for any the available open clusters.

Confronted to this problem, I have decided to use a similar, albeit somewhat less precise method. I have observed a set of stars found near zenith at my observing site, in order to minimize airmass effects. I looked for stars that come, if possible, with every UBVRI catalogue magnitudes, relatively bright, and of course not variable. The data has been found with both the SIMBAD basis as well as the AAVSO variable stars charts tool. A total of 15 stars have been observed in constellations of Auriga, Lynx and Ursa Major, at elevations around 85°, in three dates (February 14th and 25, April 11th). With the limits inherent to this approach, it did produce usable results. Here is the set of stars (only a few of them has been picked up for the graphic of illustration): 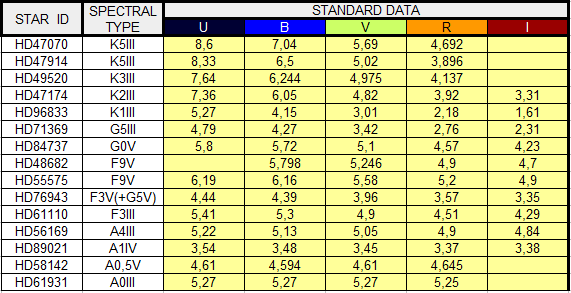 The transformations coefficients are of two types. The first one is called the color transform and the second one is the "X"mag transform.

This is done by plotting the color indexes (B-V, V-I...) of the catalogues magnitudes against the color indexes of the instrumental magnitudes, measured on the observer's data (b-v, v-i...). This step has provided reliable results directly from the observed stars, whether only one of the three sets is considered, or all of them gathered together. Here is a screenshot of the spreadsheet:

This is done by plotting again the catalogue color index (B-V...) but this time versus the difference between the catalogue magnitude of a given color against the instrumental magnitude of the same color (B-b, V-v...). Now, despite being performed on the same set that provided good data at the preceding step, this step produced disappointing variable and unreliable results. Here is the screenshot of the operation made on the full set of 15 stars: 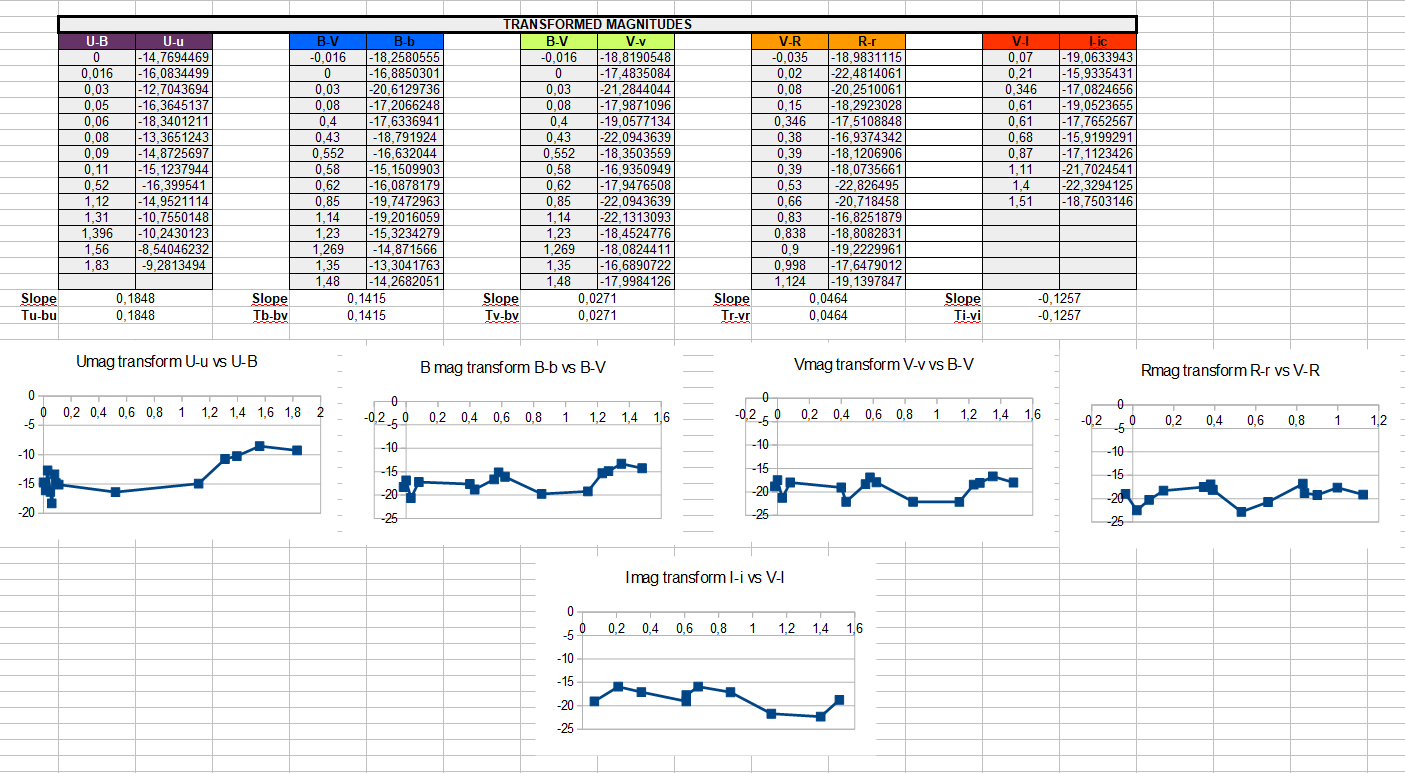 One of the sets (from Feb.14th) looked to fall with more accuracy on the "good" coefficients. I started from it and I then had to advance with a manual adjustment of the coefficients, with a trial-and-error process by experimenting on some of the stars from the sets, but by looking as well at how they perform on some of my experiences with variable stars (see Betelgeuse, R Leonis). As of April 2019, I have at hand some coefficients that look to produce satisfying results, but this work must be considered as still in progression (you can see that the Xmag transform coeffs are different from those of the spreadsheet above) : 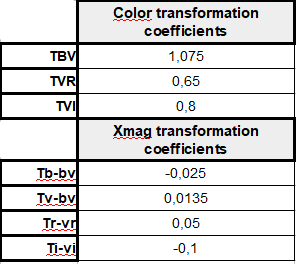