This process is based on Christian Buil's spectrophotometry method, (see part 2 of that page) although a bit different, because I'm not using flux spectra but ADU spectra.

It is possible to derive photometric measurements from a spectrum, in comparison with the usual glass filter star images, since the light intensity of the star is still there, simply spread all along the spectrum. A spectroscope like the Star Analyzer is even well suited for this because it has no slit. The slit of spectroscopes is selecting only a part of the light coming from the object, and it is then impossible to do photometry with it, since photometry supposes to record all the light (in such a case it is none the less possible to use very wide slits). On this page I describe my process of building a spectrum suited for photometry, for the complete range of sensitivity of my camera. This method is experimental so I will test it over the time.

Usually spectra are normalized in intensity during the processing because most of the time the observer do not care about photometry, but we are going to process them in a pure arithmetic addition.

At this step, I usually have a few hundreds of raw spectra imaged with relatively short exposures (never more than 500 ms) because otherwise the image would get blurred as my current equipment do not track the object. After alignment and selection, I stack from 150 to 250 raw spectra under Iris in a simple arithmetic sum, taking care of not reaching the saturation level of 32767 ADU. This operation allows the final spectrum to reach a good dynamic, and it also averages the fluctuations from the turbulence.

To stack so much spectra without exceeding the max level, the whole series of images is divided by 100. Here is a screenshot of IRIS of the addition (see that the normalisation box is unchecked). This is a spectrum of 200x25 ms spectra of 31 Leonis, a K4III star I have used to make photometric measurements of R Leonis:

I verify that the max level is under 32767 by looking at the statistics: 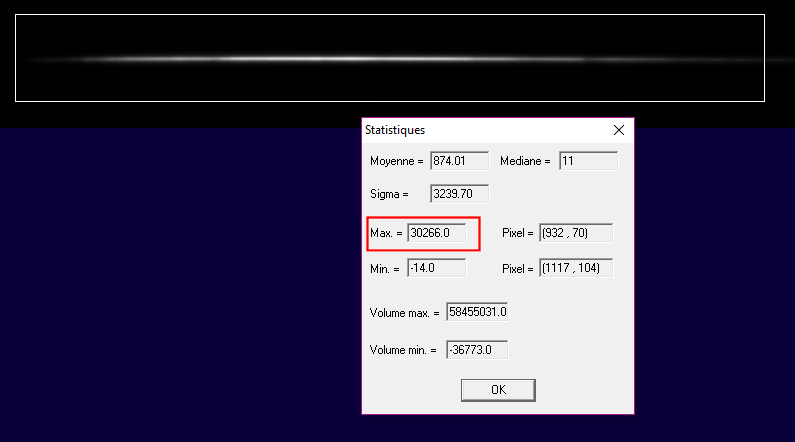 Then the spectrum is calibrated in wavelengths under VSpec, because this software is able to take into account the whole flux. For this it is important to adjust visually the spectrum to avoid a too narrow zone of binning that would cut some of the signal:

The same method is used to process a second spectrum taken with an infrared-pass filter, because the second step is the soldering of the visible part and the infrared part:

A spectrum obtained from a Star Analyzer is "pure" from its UV first end up to a wavelength of around 750 nanometers in the near infrared. At this point, it begins to mix itself with the UV/blue end of the spectrum from the second order (a grating is producing an infinity of spectrum, we just use only one, the brighter, that is the first order). This prohibits any use of the spectrum in its infrared part, but also to make photometry in the Johnson red band, since it has a tail well into the near IR (see the light curves).

3) Deriving photometric measurements from the spectrum