Planetary spectroscopy and photometry are different domains than star spectroscopy and photometry. As we are looking to objects whose perceived light is merely reflected sunlight (at least at wavelengths accessible to amateurs), for studying them it is interesting to calculate how much light they scatter back from the total flux received from the Sun. This is called the albedo. Albedo can be calculated either from spectroscopic or photometric data. Here is how I have calculated the albedo of the planet Neptune from data obtained on August 22nd, 2019.

The photometric albedo of Neptune

On the way I learned to calculate albedo, this is the first step. Calculating photometric albedos will give us one parameter mandatory to calculate the spectroscopic albedo. The idea there is to calculate how much light is relfected by the planet through each one of the photometric Johnson band.

(Let's not comment the results here, I'd just say that B and V are reliable, R and I a bit less, U not really). The  geometric albedo for each color band is given by the formula found in the book by Richard Schmude, Uranus, Neptune, Pluto and how to observe them (Springer, 2008):

Where Nm means "Normalized magnitude" and Ϭ is the angular size of the radius of the target at a distance of 1AU in degree. To calculate Ϭ R.Schmude gives for Neptune the formula:

Where s is the sub-Earth latitude on Neptune at the moment of the observation (s = -23,7 here). I have used more recent values for the magnitudes of the Sun than those given in the book, found in Willmer, 2018, The absolute magnitude of the Sun in several filters. And now these are the values of albedo of Neptune and the values used for the Sun:

The B and V values are in good coherence with Schmude's results (The secular and rotational brightness variations of Neptune, 2016) ; R and I look higher, while U is definitely wrong (it should be around 0,57).

The spectroscopic albedo of Neptune

The formula to calculate the spectroscopic albedo is found in Erich Karkoschka's Icarus paper (111, 174-192 - 1994) : Spectrophotometry of the jovian planets and Titan at 300 to 1000 nm wavelength: the Methane spectrum:

Where Δ and r are respectively the geocentric and heliocentric distances of Neptune.

To obtain the albedo spectrum, we need to turn the spectrum of the G0V star into a spectrum that is equivalent to that of the Sun. This has been done in three steps. First, I have recalculated the photometry of the star, in order to increase the accuracy. The V mag of HD217877 has been found to be V = +6,75 with a B-V of +0,59. This is 0,07 mag fainter than the SIMBAD value, which is noted to be of poor quality (E). But the color index is coherent (SIMBAD = +0,58) so we can adopt the new value. The next steps are the following:

Below is the albedo spectrum with the photometric albedo values. 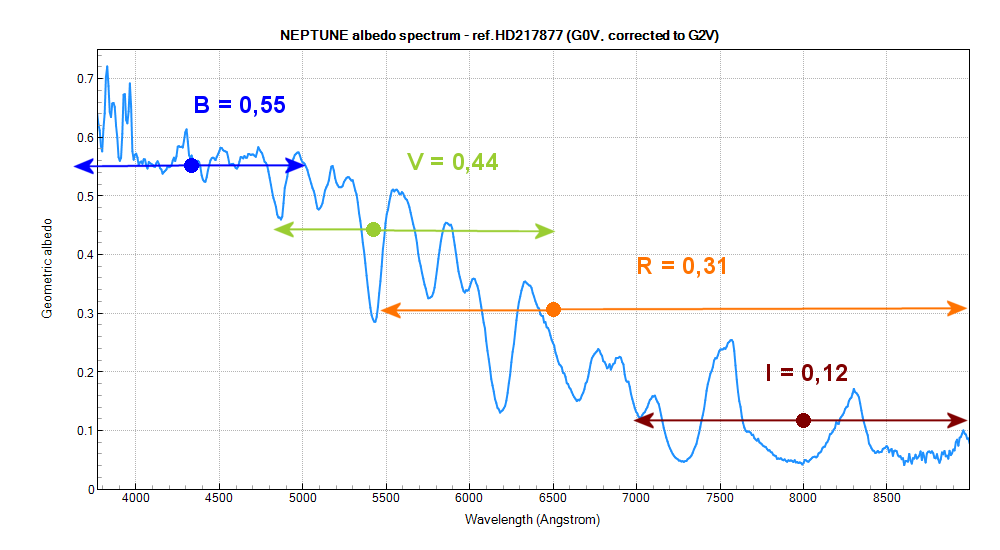