PHOTOMETRY WITH VEGA AS THE ZERO-POINT

Originally, the Johnson UBVRI photometric system has been calculated taken the bright A0V star Vega as the zero point of the system. This means that Vega was arbitrarily defined to be equal to zero in magnitude, and to be perfectly white, so the differences in magnitude between each color band, what is called the color index, were all again equal to zero. For example, the B-V = 0, the U-B = 0, and so on.

The current Johnson system has been later refined to define its zero point in a more accurate way, taken a set of different A0V stars, including Vega. Vega itself was also found to be very slightly variable, so it is not currently a very precise and acceptable zero point. However, its variability looks negligible if one wants to make just a few experiences. The idea described in this page is an exercise to perform photometry on variable stars without using color transform coefficients, always starting from Vega as the zero point.

During the summer of 2019, I observed various stars of Cygni, a constellation rich in interesting variable stars, and that can be observed very high in the sky, so the air mass factor can be eliminated as well as the need to use color coefficients. This page describes the results obtained on the famous P Cygni star. P Cygni is a very particular object; this is a blue supergiant star that is so massive that it is ejecting great amounts of gas inside its direct environment. As a result, its spectrum is showing emission lines rather than usual absorption lines; because we are now observing very hot hydrogen and helium floating around the star that shine in very precise wavelengths. P Cygni is located quite far away from us at several thousands of light years, yet is so bright that it is still visible with naked eye under a dark sky. At the eyepiece, the star shines in a noticeable yellow hue, certainly because of interstellar reddening, and maybe as well because of the presence of the strong emission lines that must modify as well the perceptible tint.

Below is the image of the original spectrum in its visible part, showing bright emission lines even at very low resolution:

And now are calibrated and corrected spectra of the star, with the infrared part. The instrument response has been calculated starting from Vega, which allows a direct expression in absolute flux (the spectrum of Vega has been corrected with its CALSPEC true spectrum). The continuum is rather flat, much more than it should be for a very bright B type star; this should be because of interstellar reddening so the blue end is quite absorbed. At left is a calibrated, but not corrected, RSpec spectrum that certainly simulates well the human vision, and at right the Gnuplot result with the instrumental correction. Especially of note are the bright hydrogen lines, H-Beta (aqua) and H-Alpha (red)

Now this is the photometry work. Using Vega as the zero point origin of the system means that the corrected magnitude is simply:

This means that to find the true magnitude of any object found at the same air mass than Vega, we can just set the equation to be:

To refine we can add the admitted true magnitude of Vega which is not zero, but +0,03 in all bands:

Then, we can calculate the corrected V magnitude of P Cygni that night:

Which is quite in coherence with the magnitude found during the summer of 2019 by the AAVSO observers.

To find the other bands, we must add another equation term. Indeed, the instrumental magnitudes of Vega being uncorrected, this means that the observed color index of the star are not equal to zero, what they should be. Here were my Vega color index that night:

So the equation becomes now, with the color index Ci:

And these are now the results for all the bands, with a smart graphic displaying them with the corresponding spectral bands. Again the agreement is good with the mean AAVSO magnitudes (see below again) in BVRI. Only the U magnitude looks a bit failed, which is maybe not a surprise, although a bit disappointing for an air mass of 1. U is supposed to be around +4,9 (+4,66 for SIMBAD): 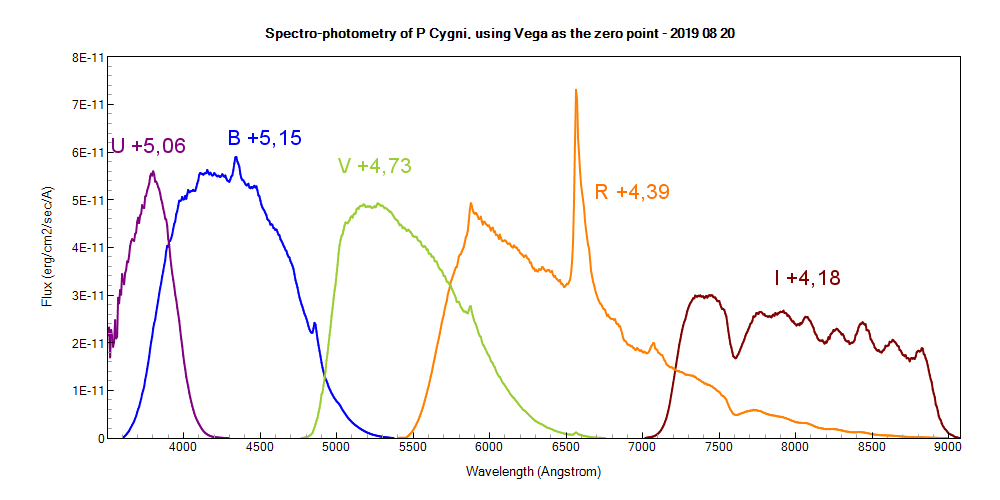 To compare again, I have performed differential photometry, starting again from Vega, but this time by correcting the values using colour coefficients. The results now become: 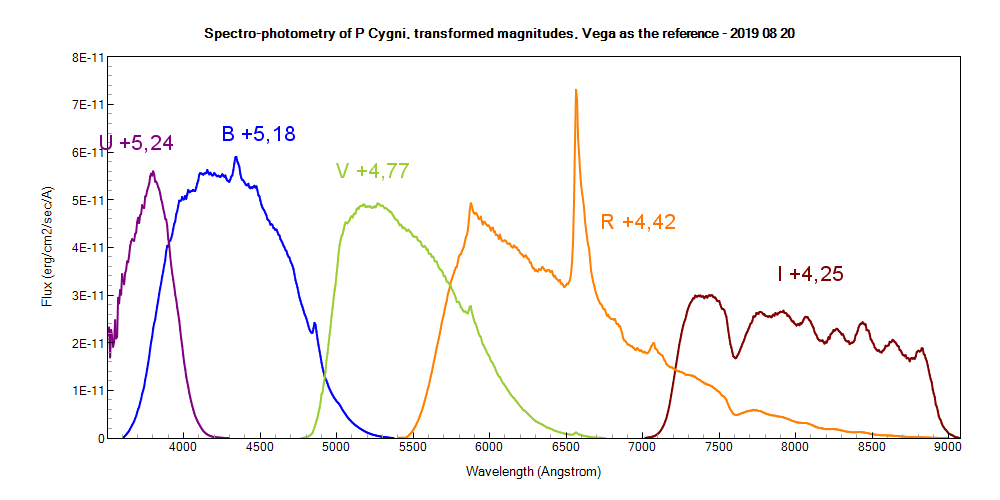 While the V and B results look just slightly off following the AAVSO values from that summer (R and I look better), the values found are still quite compatible with the observed long-term values of P Cyni; especially, those past years the V mag look to have been closer to +4,8 than +4,7. U is, however, even worse.